The Winter of Mixed Drinks 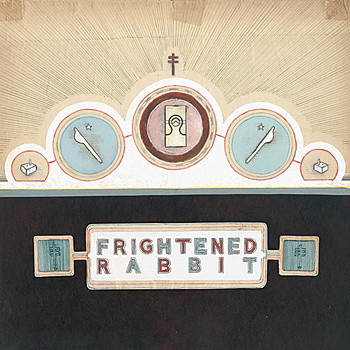 The Winter of Mixed DrinksReviewed by Admin on Oct 14Rating:

Frightened Rabbit’s steady ascent is set to rise incrementally with the release of the new album, appetite for which has been whetted by the anthemic ‘Swim Until You Can’t See Land’ teaser single which gave the band their first Zane Lowe plays and made a unaminous critcal impression at NME, Q, News Of The World, Record Of The Day, CMU Daily. More tellingly they registered strongly in the albums of the decade polls everywhere from blogs to NME and The Skinny.

Metophorically, lead single ‘Swim Until You Can’t See Land’ might have taken up where the band left off (‘Floating In The Forth’), but ‘The Winter Of Mixed Drinks’ showcases a more fully realised sound with a broader pallette, with direct and upbeat songs like (new single, 22nd Feb) ‘Nothing Like You’ and ‘Living In Colour’ jostling for position with intense and brittle epics like ‘Skip The Youth’ and ‘Yes I Would’. Speaking to nme.com at the end of last year, lead singer Scott Hutchison explained ‘We’ve broadened our horizons sonically and it feels like a natural move forward. Most importantly, it’s better than the last one.’ Produced once again by Peter Katis at Tarquin Studios in Connecticut, and engineered by Stuart Hamilton at Castlesound Studios in Scotland, ‘The Winter Of Mixed Drinks’ also boasts stunning string arrangements from labelmate, Teutonic ivory-botherer, Hauschka.

In order to facilitate the new material and flesh out the older tunes live, the band – once upon a time simply Scott alone – have recently expanded to a five piece with the addition of new member Gordon Skene (formerly of Make Model). ‘”We want to do the recordings justice when we play them live,” explains Scott. “Gordon will be playing a bundle of instruments – we just bought a tasty wee mandolin for him to fiddle!” Having toured the UK in November and December as support to Gomez and Modest Mouse (and the USA in September with labelmates The Twilight Sad and We Were Promised Jetpacks), the band have UK headline shows coming up in March.

After months on the road and a climatic sell-out show at the Scala in April 2009, Frightened Rabbit finally called a hiatus to touring, Hutchison decamping to the splendid – and beautiful – isolation afforded by the seaside town of Crail on the Fyfe coastline to write the material that would make up the new album. Perhaps because of this ‘The Winter Of Mixed Drinks’ is populated with nautical references in the same way that Midnight Organ Fight found expression through body metaphors.

Frightened Rabbit saw out 2009 playing to an 80,000-strong crowd at Edinburgh’s Hogmanay celebration and 2010 will be a pivotal year for the band, as Scott acknowledges: “I’ve never been in a position of being aware of an audience of any size that was waiting for our music until now. You have to be aware of it or else it’s totally selfish. Pressure sounds like a negative thing but it’s quite positive actually. It feels earned. Everything we have achieved has been earned. It would be disappointing if we didn’t become more popular because that’s got to be the goal for every new record. If it comes I think we are actually ready for it now.’